Don’t Be A Jerk 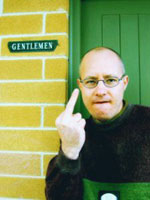 My second job, after being asked to find another career from my first employer, was working for a personal development company in Atlanta on 100% commission.

The man who hired me, Jim McKey, was the owner of Dynamic Training Institute and a fantastic speaker and trainer. My job was to help him build his business by selling his services, and in return he promised to teach me how to become an effective and entertaining speaker. Our relationship was completely symbiotic and I could not have designed a better job for myself.

After our initial interview, Jim suggested I come to his public speaking workshop that evening. He was going to talk about how to deal with difficult participants and indicated that he could use my help. He also assured me that I would learn one of the most valuable lessons every public speaker should know, and he guaranteed that I would remember this experience for the rest of my life.

I arrived early that night to help Jim set up the room and find out how I could help him with his presentation. He told me that the best way to teach someone how to deal with a difficult participant in the audience was to show them how it was done. With that, he asked if I would stand up about 15 minutes into his presentation and yell out, “This is a waste of my time. When are you going to teach me something I don’t already know?”

Just as promised, I stood up and interrupted Jim’s presentation doing exactly what he asked me to do. The room fell silent. Everyone looked at me as if I was the biggest jerk on the planet. Before Jim said a word, one of the participants yelled out, “Sit down.”  “Who do you think you are?” “If you’ve got something to say you rude SOB, save it for the parking lot.”

I was uncomfortable and scared, but I promised Jim that I would keep up the act until he had an opportunity to demonstrate what he wanted to teach, which he did masterfully.

Not only did I learn (along with the rest of the audience) how to handle a difficult participant, but I saw first hand how quickly and aggressively a crowd can turn against an individual if he or she attacks someone they like. The audience was willing to defend Jim because they liked him and they were ready to fight me because I affronted their friend.

The instant we concluded the exercise I begged Jim to explain to the audience what he had asked me to do. I couldn’t handle the feeling that so many people hated me and some even wanted to harm me physically.

As I recall, the conversation whet something like this.

Bob: “Jim, please tell the audience that you asked me to stand up and be a jerk so that you could demonstrate how to handle a difficult participant.”

Jim: “I’m teasing. Ladies and gentlemen, I did asked Bob to stand up and interrupt me so that I could show you how to handle a difficult participant, however, I had no idea he would be so good at it.”

Jim: “There are three things I want you to remember from this exercise, and I doubt if Bob will ever forget them. If you have a difficult or rude person in your audience.

Jim was a fantastic teacher and professional speaker, and I will never forget what he taught me about likability.

If you’re really interested in learning how to deal with a difficult participant, listen to my audio program on RecognizedExpert.com.